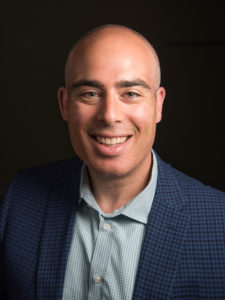 Born and raised in Toronto , Canada, Cantor David Rosen came to congregation Kol Ami having served with distinction at congregations in Toronto and Livingston , New Jersey. A graduate of York University with a BA in Psychology and an Advanced Certificate in Hebrew and Judaic Studies, he attended the Debbie Friedman School of Sacred Music at the Hebrew Union College – Jewish Institute of Religion where he received a Masters of Sacred Music and was ordained as a Cantor in 2003. He has been an active member of the Executive Board of the American Conference of Cantors since 2010, a member of the Cantor’s Assembly and a past President of the Toronto Council of Hazzanim.

Cantor Rosen’s love of for Judaism and Jewish music began in earnest as a bar mitzvah and eventually led to his belief that “prayer and music can transform people spiritually and reveal a person’s authentic self … music can say things words can’t … highlights our inner voice taking us to places we might not consciously go… and nurtures us as a community”.

He has elevated the live music experience at Shabbat services by adding percussion, strings and flute, by including more choral music with the expanded congregational choir and encouraging greater participation of the congregation during worship. He has produced musical performances as part of Kol Ami Synaplex, has been a guest lecturer/soloist/conductor in the community and abroad. As part of his love of choral music he co-founded the Toronto Jewish Choral Festival with 250 singers.
Cantor Rosen is currently producing a Kol Ami CD featuring the 600 voices of every child in the Early Childhood Program through 6th grade religious school singing 22 songs celebrating Shabbat , holidays and Judaism.

As a living kidney donor, Cantor Rosen has served as a motivational speaker for the Kidney Foundation of Canada and Trillium gift of life and plans on exploring more work fostering organ donation. In his spare time, Cantor Rosen enjoys running, tennis, yoga, swimming and cooking and has become well known for his favorite middle eastern/Israeli dish, Shakshouka.

Cantor Rosen and his wife Rabbi Ilyse Glickman live with their son and their “adorable” shih-tzu.