The information on this site is meant to help you manage both the secular and Jewish elements of death and mourning.
It is not intended to replace direct communication with the clergy or temple staff.

When Death is Imminent

Viddui may be recited as a deathbed confession by the dying person or by someone on their behalf.

In addition, you may wish to read this article that summarizes The Book of Job and analyzes the fundamental religious paradox of why a loving God would construct a world so full of suffering.

At Time of Death (or when you learn of a death)

Many find comfort in reciting this ancient prayer at the time of death:

Designating a Close Friend or
Relative as the Family’s Representative

You may want to consider appointing a trusted friend/relative to assist you in handling the dozens of logistics that can arise.

Please read through Options to Consider and Immediate Decisions to Make to learn the many supports included with your Kol Ami membership.

Options to Consider and Decisions to Make Immediately

Phone Calls to Make as Soon as Possible

Help is readily available for you and your family.

Funeral Home
If you haven’t chosen a funeral home or cemetary, the temple can help guide you.

Judaism prescribes certain rites and rituals for a funeral and burial. You will decide for yourself what feels right for your family. There is no obligation to follow any of these practices.

Shiva
Shiva provides a framework for mourning. This ancient tradition calls for mourners (parents, spouse, siblings, and children) to receive comfort from friends and family in the days following burial. It is a mitzvah to “pay a shiva call.”

The most common question asked is “How do I feed all those guests?” The answer is that you do not. The function of visiting mourners is to provide comfort, not to be guests. Your designated family representative can help coordinate with local caterers as needed.

Saying Kaddish
As a congregation, Kol Ami recites the Mourner’s Kaddish on Friday nights and Saturday mornings. The name of the deceased is announced on the four Fridays and Saturdays (shloshim) following the burial. Temple Israel in White Plains invites mourners for its morning and evening daily minyon. Please contact Temple Israel for details.

Unveiling the Headstone
Approximately a year after the burial, it is customary to gather for a graveside ceremony in which the headstone is “unveiled.” There are no formal requirements for this service; however, traditional Hebrew readings and a final Kaddish are often recited. Upon request, the clergy will help families plan for a meaningful service for the unveiling. 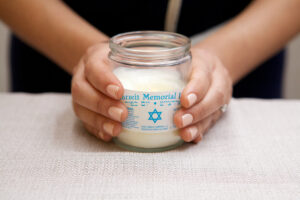 Observing Yahrzeits
It is customary to commemorate the anniversary of the death of a loved one by lighting a Yahrzeit candle. Kol Ami invites and encourages you to share the name and yahrzeit of those who have passed. Their name will be announced at temple services, and you will receive an annual reminder of the secular date or date on the Hebrew calendar, however you choose.

Yahrzeit candles are traditionally lit for loved ones four other times each year: Yom Kippur, Sukkot, Pesach and Shavuot. On these same four days, Kol Ami services include the Neila (memorial) service.