At Congregation Kol Ami we are privileged to have Czech Memorial Torah Scroll #45, which is estimated to be between 200 and 250 years old. It’s 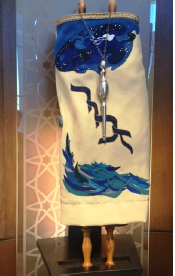 provenance is from Brno, now in the Czech republic and likely came from one of the many small village communities in the countryside near the city.

The torah came to Kol Ami in October of 1973 through the generosity of Mr. and Mrs. Charles Petschek. Mr. Petschek’s grandmother was born in Brno and he thus asked for the privilege of acquiring the scroll. On Friday, December 7, 1973 at the 50th Anniversary of the Congregation, the Torah was introduced into the service as part of the celebration.

The Nazis collected gold and silver ornaments, ceremonial objects and Torah scrolls from towns all over Europe. [See note] A group of Czechoslovakian Jews was forced to arrange and catalogue the items which had been assembled in Prague. After the war, the Communist Government of Czechoslovakia released the Torahs scrolls.

In 1964, the Memorial Scrolls Committee of Westminster Synagogue in London arranged for the shipment of 1564 scrolls to the Synagogue, where they were catalogued and repaired and restored when possible. Each Torah was given a numbered brass plaque to identify its origin. Scrolls that could not be made fit for synagogue use were sent to religious and educational institutions as solemn memorials. Those that were repaired and could be used in religious service were sent to fulfill requests of synagogues all over the world in return for a contribution toward restoration expenses.

The Memorial Scrolls Trust, a U.K. non-profit organization, has recently begun to reach out to synagogues and other institutions who received the Czech scrolls to gather updated information about them. They plan to continue to enhance their website so it becomes “a repository of all knowledge concerning the 1564 scrolls, the Jewish history of the towns they came from, the Jews of those towns, their fate, survivors stories, photos etc. They will also note where the scrolls are now, how they are used and honoured etc.” More information about the Memorial Scrolls Trust is available on their website.

Note: Previously it had been thought that the Czech scrolls and other Jewish ceremonial objects had been collected by the Nazis as part of a plan to set up a “museum of an extinct race” after the war. As it turns out there is apparently no documentary proof for this theory, and recent studies indicate that the saving of scrolls and other ritual objects was the result of actions of members of the Jewish community.