Circle The City With Love to Stand Against Racism 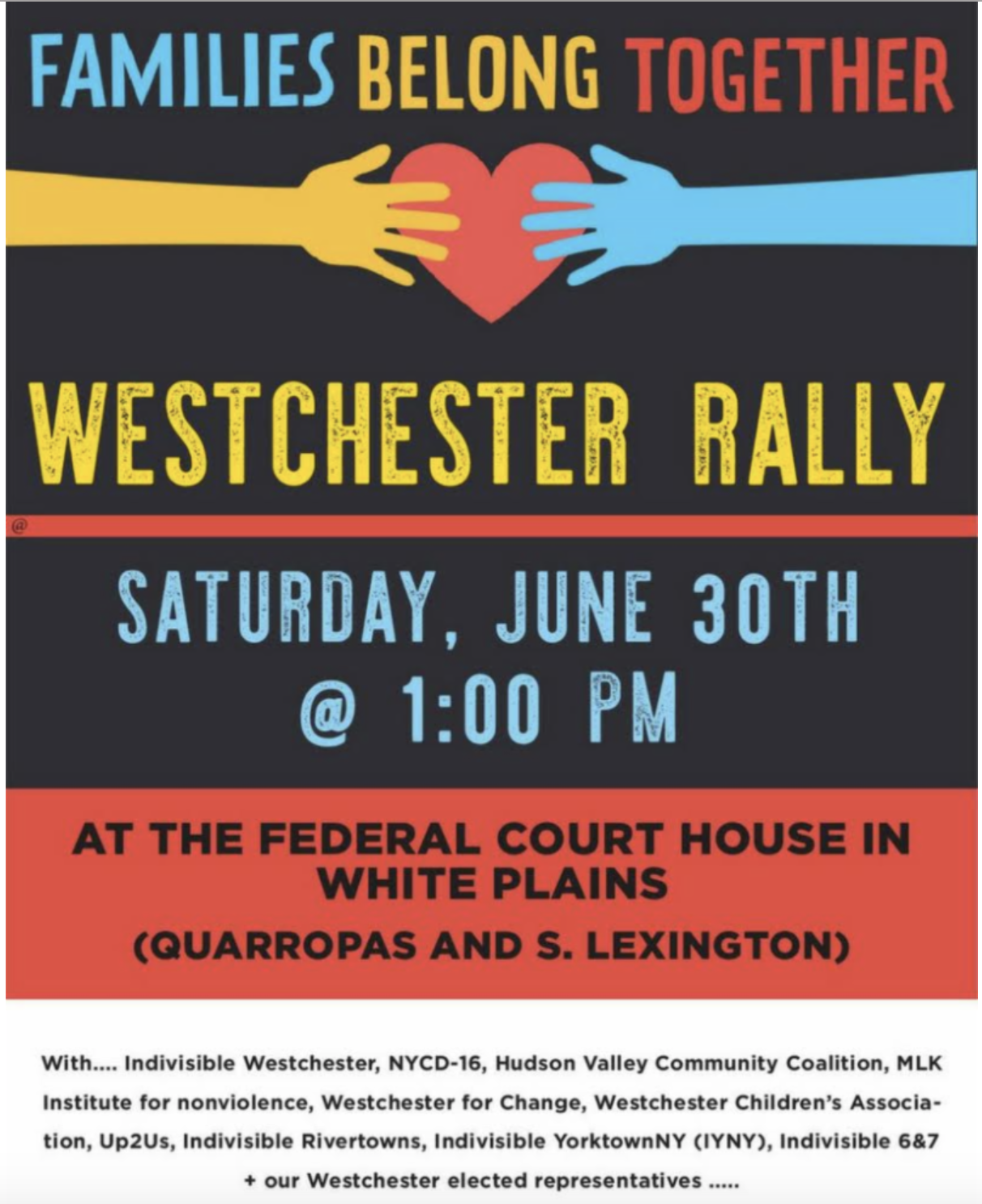 We Cannot Be Silent in a Moral Emergency

Many of you have responded to the inhumane policy of family separation happening at our southern border. We are asking you to join over 12,000 organizations and individuals who have signed a document declaring that we are in a state of moral emergency. We believe the Jewish community must respond with one clear voice.

Please read the information below and at www.bendthearc.us and then click to add your name to the declaration.

We will continue to follow-up with additional resources and opportunities for more action.

When our nation is hit by a natural disaster our leaders declare a state of emergency. Resources are diverted. Communities come together to help. We focus on saving lives and recovery. Business as usual is stopped.

Right now our nation is being struck by a human-made disaster caused only by the cruelty of this Administration. The very soul of our country is under attack. We need to call this moment what it is — a state of moral emergency — and focus the full attention and resources of our community to stopping the government acting in our name.
As Jews, we cannot be silent as children and families are dehumanized, criminalized, and traumatized by the President of the United States.

That’s why I’m reaching out to the American Jewish community — individuals, community leaders, and organizations — to Declare a State of Moral Emergency.

In 1963, Rabbi Abraham Joshua Heschel sent a telegram to President Kennedy about the crisis of civil rights in this country, proposing he declare a “state of moral emergency… the hour calls for high moral grandeur and spiritual audacity.” Inspired by Heschel’s words, we must declare this state of moral emergency ourselves.1

Every day since they began this policy, our government separates an average of 48 children from their parents, with no plans or process for their reunification. Our hearts are torn open by reports of crying babies beings taken from their mother’s arms, of children being sent to bathe and never returning to their parents, of tent cities to house children in the Texas desert in summer, of indefinite detention.3

As Senator Lindsey Graham said on CNN, “President Trump could stop this policy [of family separation] with a phone call.” Instead, the Administration is lying about the origin of their own “zero-tolerance” policy, blaming the opposition and attacking journalists. They are quoting scripture as a justification for unconscionable cruely.

This is what encroaching authoritarianism and white nationalism looks like.
We must connect the dots.

Jews know all too well what it looks like for a government to punish and enact cruelty on the most vulnerable. We have seen this before. We must sound the alarm now and commit to taking action and taking risks together to end this crisis.

Add your name to the Declaration of a State of Moral Emergency.

Dear Fellow Congregants,
Below is a letter from Rabbi Jonah Pesner, Director of the Religious Action Center in Washington DC. If you are concerned for families staying together please read below and take ACTION.

Tomorrow, I am going to the border. If you are also heartbroken at the idea of children needlessly and cruelly separated from their families, read on for six ways you, too, can take action.

With a group of 40 faith leaders – 10 each from the Jewish, Muslim, Catholic and Protestant faith traditions – I will be meeting with, and bearing witness to, the families torn apart by the Trump Administration’s family separation policy. Standing together, we will call on the Administration to end this morally abhorrent practice.

In May 2018, Attorney General Jeff Sessions announced that the federal government would adopt a zero-tolerance policy for unauthorized border crossings, officially instituting practices that separate children from their families. This policy applies to all border crossings, even to those people seeking asylum. We are heartbroken and horrified by family separation. We join the wider Jewish community, faith community and others in calling upon the Administration to put an end to this shameful policy.

Tomorrow, Barbara Weinstein, Rabbis David Stern, Leora Kaye, Nancy Kasten, and David Segal, Cantor Jason Kaufman, and I will represent the Reform Movement in McAllen, Texas, the site of the United States’ largest border processing and detention center. McAllen has become ground zero for the Trump Administration’s family separation policy that, in a six-week period, has left approximately 2,000 children separated from their parents. This is just one way we are getting involved, and we hope you will join us in shedding light on this urgent issue and bringing justice to the center of this nation’s immigration system.

Many have reached out searching for ways to help end this family separation policy and support the children and families being torn apart. Here are six ways you can help:

For even more ways to take action, read this excellent article in Slate by Dahlia Lithwick and Margo Schlanger.

Thank you for your commitment to keeping families together.

IT IS NOW MORE IMPORTANT THAN EVER BEFORE
THAT WE STAND STRONG AND STAND UP TOGETHER.

March For Our Children

Dear Friends,
Be The Light for Social Justice! This issue of our Tzedek, Tzedek Tirdof – Pursue Justice Newsletter is focused on opportunities for advocacy and engagement.
General Advocacy:
Reform Jewish Voice of New York State (RJV), under the auspices of the Union for Reform Judaism, is Judaism’s progressive voice for social justice in New York State. RJV just announced that registration is now open for RJV’s Annual Albany Advocacy Day.
On Monday, March 12, 2018, RJV will lead an intergenerational force lobbying for:
Your voice is needed! Register today at rjvnys.org/aad.
Teens who wish to participate can register though the NFTY site.
Engage in Acts of Tikkun Olam:
On Thursday, February 14th, we will spend the morning at the AFYA Foundation, (140 Saw Mill River Road, Yonkers). Join Barbara Wexler and friends from Kol Ami as we sort and pack critically needed medical supplies, hospital equipment, and humanitarian provisions which will be shipped by AFJA to casualties of the worldwide health crises. We will meet at Kol Ami at 9:30AM and carpool together.
Space is limited. Please RSVP to Barbara Wexler at wexlerartworks@gmail.com.

Update on our Syrian refugee family, the Shatlos

As most of you know by now, Congregation Kol  Ami and Scarsdale Synagogue Tremont Temple-Emanuel have been working together to sponsor and assist a refugee family from Syria. The family has been living in White Plains for the past seven months and has settled in to life in the United States. You may remember that the mom and dad are Amina and Salam and the children are Alan, 9; Digar, 8; and Laila almost 6. They are Kurdish and originally from Aleppo, but they came here from Malaysia where they had been living after escaping terrible violence in their neighborhood. Everyone speaks English, although the children are more fluent than their parents who have been attending ESL classes since they arrived in the US.

Although Salam initially began observing in a dental lab to learn the technology, he has decided not to pursue that profession and instead is currently employed at Macy’s Department Store. He is still finding his way with the help of our employment co-chair and may pursue a culinary course for refugees where he can learn and be paid at the same time.  Due to the enormous generosity of congregants at both synagogues, funds were raised to purchase commercial sewing machines so that Amina could start her own alteration business. Due to the clothing factory connections of one of our employment committee co-chairs we were able to obtain these excellent machines easily and slightly wholesale. Amina is now in business – she is an expert seamstress who can alter and make any clothing item.

The children, who are enrolled in Church Street School in White Plains, are doing well and are very happy there. They truly are blossoming. Through the efforts of one of our education co-chairs, the older boy is singing in the chorus, (he was thrilled with his first choral performance) and is learning chess and the violin. All the children are taking a weekly dance class after school and the two older children are enrolled in a weekly drama program – also thanks to our education co-chair. Additional thanks to our finance chair and the community connections committee for providing everyone in the Shatlo family with plenty of warm clothing for the very cold weather.

With the help of another member of the community connections committee, Salam has learned about American banking and managing finances.

In an arrangement with the teen director, Salam spoke to Kol Ami’s teens about his experience growing up in Syria and as a refugee. His talk was well received by those in attendance and he answered many questions asked by the teens.

Many committee members have provided the Shatlo family with typically American experiences – trick or treating on Halloween, visits to the Botanical Gardens, to the Bronx Zoo, to the Museum of Natural History and to family events in their homes. In addition, our health committee member has seen that  everyone in the family has made it to a variety of medical and dental appointments.

Much has been accomplished on behalf of our family and by the family members themselves. They are very grateful to all of the members of our group who have remained steadfast in their involvement and support and have enabled the family to have progressed.  Many thanks to all of you who have given so much.

Donate Online To Our Refugee Fund

We’re proud to have won this award at the 2016 URJ Biennial in Boston.